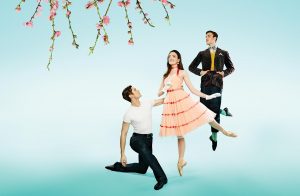 Froth and bubble abound in this comic production of a love triangle set in the French countryside in the 1950s.
Originally produced on 1 July 1789 in Bordeaux, this ballet has survived many changes of times and tastes. Marc Ribaud’s choreography brings a contemporary joy and charisma to this ancient tale.
Lisa (danced theatrically by Lina Kim) is the only daughter of Widow Simone (Joel Woellner) owner of a successful farm. Lisa loves Colas (Shane Wuerthner) who loves her back in spades; but the Widow Simone has agreed that her wayward daughter should marry Alain (Ze Wu), son of the rich and pompous wine merchant Thomas (Rian Thompson).
Joel Woellner dances a larger than life role, delighting the audience and proving once again there is no farce like a French farce.
Ze Wu does a splendid job of portraying the unwanted suitor, acting as a fine foil to Colas (Shane Wuerthner ) who has, after all, love on his side. Wu impresses with some mighty leaps.
It is harvest time. The corps be ballet show their artistic depth in expressing  a celebration of the harvest, some in traditional clothing.
The village notary (Daniel Kempson) arrives with the suitor Alain (Ze Wu) and his father in order to draw up the marriage contract; but, as Australian courts have found recently, marital contracts can be tricky things indeed!
If the upcoming Gold Coast Commonwealth Games were to include a competition for dance by charming village children, the kids in this merry production would win by a grand jete.
The music is performed with beauty and gusto by Camerata – Queensland Chamber Orchestra conducted by Nigel Gaynor.
Choreographer: Marc Rimbaud
Music: Ferdinand Herold
Arranged by: John Lanchbery
Conductor: Nigel Gaynor
Costume designer: Lexi De Silva
Lighting designer:Jon Buswell
Set designer: Richard Roberts
Performances: 4-19 August 2017
Running time: Two hours and five minutes with a 20 minute interval.
— Matt Foley
(Performance seen: Wed 9th August 2017)