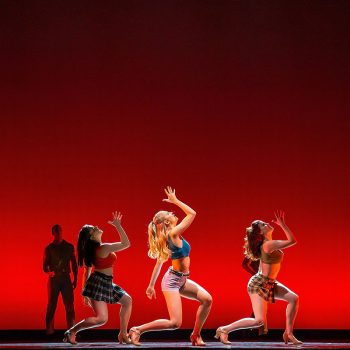 It is refreshing to see Opera Australia presenting a classic modern opera/musical rather than merely reciting the grand operatic  works of yesteryear. No art form can survive unless it deals with issues in contemporary life and culture.

Tension has built up between two rival gangs in New York’s Upper West Side – the Jets,  born in America of Polish roots and led by Riff (Noah Mullins), and the Sharks (Puerto Ricans led by Bernardo (Temujin Tera) who have migrated to the US.  The fight for dominance is vividly portrayed in a powerful, aggressive dance between the two gangs.

Riff’s best friend Tony (Nigel Huckle)  agrees reluctantly to help the Jets although Tony feels he has grown out of the gang and dreams of a better future. Huckle sings brilliantly  the classic “Something’s coming”.

Bernardo has chosen his sister Maria (Sophie Salvesani) to marry Chino (Tomas Kantor), yet Maria has eyes for Tony at the dance, much to the annoyance of the Sharks’ leader.

Later that evening the now smitten Tony in the “balcony scene” sings “Maria” to his new love. They promise to love each other in the spectacular song “Tonight”.

The Puerto Rican young ladies perform the sardonic  “America “ – “Everything free in America, for a small fee in America”.

When police officer Krupke questions the Jets, the gang makes jokes about him and the police in “Gee, Officer Krupke” – a sociologist’s delight.

Huckle and Salvesani sing together magnificently. They embody the hope of young love in the face of adversity.

This performance is indeed a night to remember – wonderful song and  superb dance!

From forth the fatal loins of these two foesA pair of star-cross’d lovers take their life Whose misadventured piteous overthrowsDo with their death bury their parents’ strife.