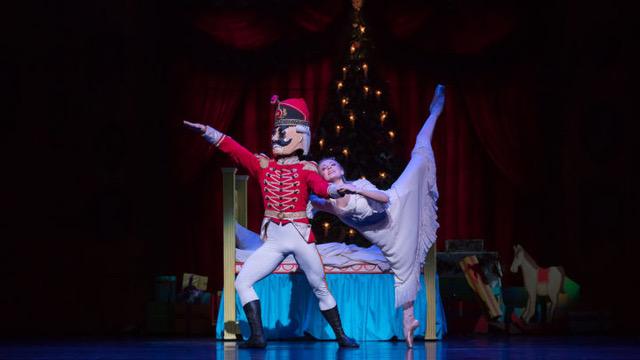 What a marvellous Christmas celebration for the young and the young at heart!

The Queensland Ballet breathes fresh life into this classic favourite. Lou Spichtig dances with vigour and joy as Clara, the youthful dreamer about whom the drama unfolds.

The mysterious Dr Drosselmeyer ( Alexander Idaszak) brings  a special gift of the Nutcracker to Clara during the Christmas party. She retires to bed and to the world of dreams. At the stroke of midnight Clara “awakes” to the attack of giant mice. Fortunately she is bravely defended by life-sized toy soldiers led heroically by the Nutcracker. The King Rat (Vito Bernascino) attacks the Nutcracker but Clara hits him with her shoe and the Nutcracker wins the battle.

As if by magic, the Nutcracker is transformed into the Prince (Camilo Ramos). Clara and the Nutcracker Prince depart for the Kingdom of Sweets in an elevating sleigh across the Lemonade Sea.

In the second half, all is fun and merriment. Tchaikovsky’s brilliant musical score played by the Queensland Symphony Orchestra  lifts us to the dizzy  heights of the Arabian Dance (Chiara Gonzalez and Patricio Reve),and  the Mirlitons (Laura Tosar, Mia Heathcote and Liam Geck). Vito Bernasconi re-emerges in the  role (loved by the audience) of the Russian Dancer with spectacular leaps. The “Chinese” dancers (Shaun Curtis and Edward Pope) do an elaborate, athletic mock battle with sword and spear.

The Sugar Plum Fairy (performed exquisitely by Yanela Pinera) and the Nutcracker Prince (Camilo Ramos) dance a grand pas de deux. This is all the more poignant as this is the last production season  which Camilo Ramos will dance with the Queensland Ballet, fittingly with his wife Yanela Pinera. Fortunately Ramos will continue his work with the Queensland Ballet in the role of teacher.

In the event, the wondrous Clara (Lou Spichtig) awakens from her dreams as the Nutcracker salutes her.