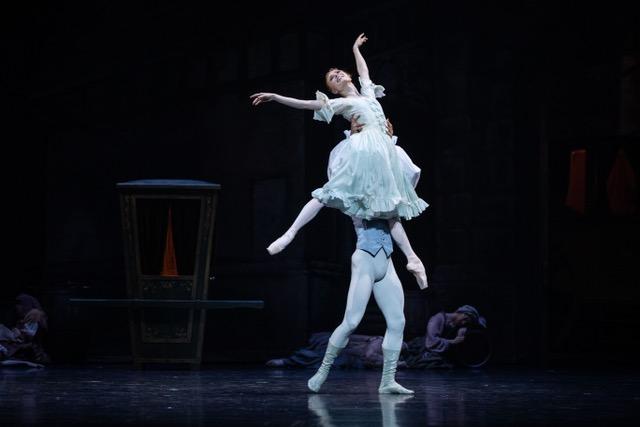 Mia Heathcote is simply glorious as Manon.  She dances  sublimely to the evocative music of French composer Jules Massenet. She brings emotional richness to the role. She glides and flies with consummate virtuosity but also displays subtle character development  as the  drama unfolds.

In the first Act she expresses her love for the student Des Grieux (danced finely by Patricio Reve) in two scintillating, but innocent, pas de deux. This is  despite the best efforts of her brother Lescaut (Alexander Idaszak) to broker a deal for Manon to link up instead with the wealthy, powerful Monsieur GM (Vito Bernasconi).

In the second Act she dances beautifully, but with a touch of guile, as the courtesan to Monsieur GM in Madame’s house of ill repute.

In the third Act in New Orleans (where Manon is imprisoned) she dances defiantly to resist the unwanted advances of the head Gaoler. She then escapes with her beloved Des Grieux to inevitable death in the hot, unlivable surrounding bayou. Their final pas de deux is full of pathos, yet expresses a deep beauty. Principal conductor Nigel Gaynor has described it aptly in these terms:

The ballet concludes with their final exhilarating pas de deux at the end of Act III. Despite the fact that they are to perish in the Louisiana swamps, the music conveys a tremendous sense of triumph over adversity, with soaring melodies, swelling fortissimos and breath-taking choreography to match.

Mia Heathcote’s brilliant performance in this ballet is one of those turning points in the history of ballet in Queensland. She has shown herself to be a worthy successor to our great prima ballerinas such as Michelle Giammichele and Rachael Walsh.

This is a gig not to be missed. Those lucky enough to have attended on opening night will tell their kids and grandchildren of that moment when the audience rose as one to give a heartfelt standing ovation. It was a tribute to these dancers, musicians and other artists who have made this art form express the poignancy of three centuries ago, yet agonisingly present now. It is a production of world class indeed of which the Royal Ballet (London), the Paris Opera Ballet or the Bolshoi (Moscow) would be envious. The Queensland Ballet is one of but a handful of companies with permission to stage this challenging work choreographed by the late Sir Kenneth MacMillan.