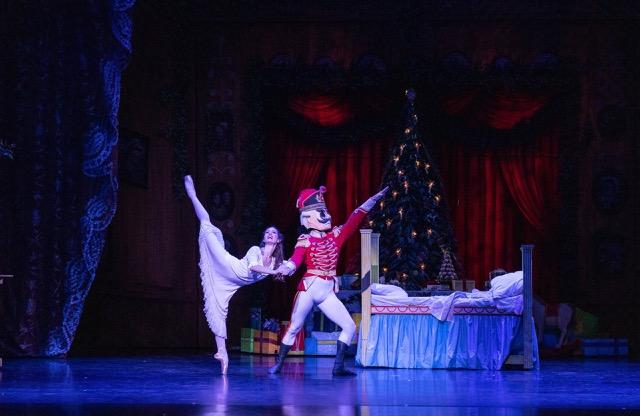 With Christmas just around the corner it is time to crack a few nuts! What better way than via the magic of dance?

Young Clara (danced vividly by Chiara Gonzalez) enjoys the merriment of a Christmas party, despite the pesky efforts of the odd boy. A master of magic tricks, Dr Drosselmeyer (Alexnder Idaszak) arrives with the gift of a nutcracker for Clara.

At this point we transit to the world of Clara’s dreams. Swarming about the stage are the scary  giant mice, up to no good. Fortunately the Nutcracker (Liam Geck) leads toy soldiers into battle to defend the young heroine. Clara swats the King Rat (Vito Bernasconi) with her shoe and victory reigns for the Nutcracker who is magically transformed into a handsome Prince.

Clara and the Prince venture away across the Lemonade Sea to the Kingdom of Sweets.

The Queensland ballet gives us a mixture of rare delights from around the globe in the second Act. We are treated to dance from Arabia ((Neneneka Yoshida and Alexander Idaszak),  China ((Mali Comlekci and Luke DiMattina), Spain and Russia.

The swirling Russian dance of Vito Berlasconi brought delight to the audience, moving with gusto to the enchanting music of Russian composer Peter Ilyich Tchaikovsky. The Queensland Symphony Orchestra displayed their virtuosity.

Yanela Pinera is sublime as the Sugar Plum Fairy in a pas de deux with the Nutcracker Prince (Liam Geck).

Alas, all wondrous dreams must come to an end. Clara awakes and is ritually saluted by the faithful Nutcracker.

The Queensland ballet performance of The Nutcracker is now an annual institution. It continues to bring joy to children and the young at heart.